Barcelona in your pocket

Barcelona in your pocket

Barcelona was established around the 1st century BC by the Romans. It has a strong energy and character and a cosmopolitan feel and look – different nationalities, cultures, ethnicities, and languages mix here. The number of cultural activities in Barcelona is endless with the abundance of theatres, symphony and concert halls, and museums. Exploring the historical and cultural legacy of Barcelona will leave you with an exceptional experience.

We have gathered some interesting information for you in case you lack time but still want to get a taste of the city.

Welcome to the entertainment capital of Spain

Activities not to miss

Enjoy Barcelona’s beauty from the Balearic Sea, as you climb aboard a catamaran for a two-hour tour, beginning in the Marina Vela. Get a different perspective of the city while feeling the breeze and the sunny weather, enjoying some refreshments and maybe even spotting a dolphin.

A big soccer fan or not, the Camp Nou stadium will leave you speechless. The amazing atmosphere could be felt all over the place as some of the most historical football matches in the history of the game have been played at this iconic stadium. Even better if you manage to snag a ticket for some game.

Best views are from the air! The Montjuïc cable car is one of the most special ways to discover the beauty of Barcelona. Contemplate the magnificent panoramic views as you climb aboard this 750 metres of route journey culminating in the Montjüic Castle – the living history of the city.

Barcelona's museums on a budget 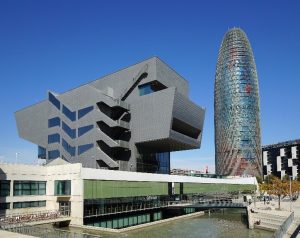 Enjoy some time at a museum – most of the public museums offer a free entrance on the first Sunday of each month and every Sunday after 3 pm.

City History Museum – The museum has a free entrance every Sunday from 3 pm to 8 pm and all day on the first Sunday of the month.

Picasso Museum – A fine collection of the artist’s early work and some of his own interpretations of Velazquez’s Las Meninas. Free every Thursday from 4 pm to 7 pm and the first Sunday of the month (online booking required. Tickets are only available 4 days before the date.

City History Museum (MUHBA) – The highlight is the Roman remains of Barcino five metres under street level. A must for any Roman history or archaeology enthusiast. Free every Sunday from 3 pm and the first Sunday of the month.

Frederic Marès Museum – It holds this sculptor’s private collection. Don’t miss the fascinating top floor displaying every object imaginable. Free every Sunday from 3 pm and the first Sunday of the month.

Barcelona Design Museum – A new addition to the city, this modern building holds an interesting collection as well as travelling exhibitions. Free every Sunday from 3 pm and the first Sunday of the month.

Explore the Roman remains of Barcino 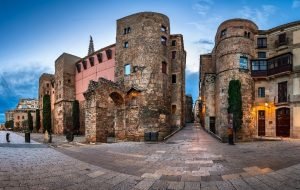 You can walk around the whole perimeter of the Roman city following explanatory panels. The most spectacular parts are the city entrances at Plaça Nova at Pati Llimona Civic Center and the wall and towers at Plaça Ramon Berenguer. However, the wall is embedded all over the city. You can find it inside the buildings, like at the Mercer Hotel or in other houses along Avinyó Street.

There are two Roman houses that recently opened to the public: The Domus of Sant Honorat at Carrer de la Fruita, 2 and the Domus of Avinyó at Carrer d’Avinyó, 15. The highlight of the house at Avinyó street is the well-preserved wall murals. Both have a free entrance on the first Sunday of the month from 10 am to 2 pm.

Outside the perimeter of the Roman city, at Plaça de la Vila de Madrid, an unexpected burial site was uncovered in the 1950s. A few meters under street level you can see the funeral monuments lined up on both sides of the old road that led to Barcino.

At Plaça del Vuit de Març, the remains of the original aqueduct discovered in the 1980s are on view attached to the walls. Nearby, inside Casa de l’Ardiaca, not only can you enjoy for free its beautiful patio but you can also see the end of the line with the deposit that distributed water to the whole city.

For sure you are not expecting to find the remains of a 2,000-year-old temple stuck inside a house. But anything is possible in Barcelona. At the highest point of the Roman City (Carrer del Paradís, 10), after entering the house, four impressive columns are waiting for you. This is what is left of the original temple dedicated to Emperor Augustus, the founder of the city. 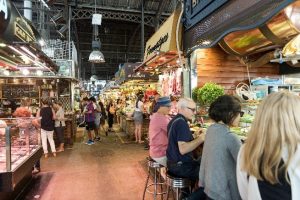 La Cova Fumada  – This is by no means a fancy restaurant – and it doesn’t try to be! La Cova Fumada is a real local’s haunt which is full to the brim every weekday lunchtime.

Sésamo – This edgy vegetarian restaurant in the Raval offers a seven-course tasting menu with two drinks and water for just €25 per person.

Diagonal Mar Centre – This shopping mall right is located right next to the International Convention Center and offers a supermarket and various restaurants.

Mosquito – Mosquito is one of Barcelona’s best gems: an authentic Asian restaurant with a wide selection of craft beers served in a cool locale in the Born.

Kiosco –  If there seems to be a gourmet burger joint on every street corner in Barcelona these days, the city has Kiosco to thank for setting the trend.

Chen Ji –  Chen Ji stands out as the best – and arguably most authentic – Chinese restaurant in the city.

Caravelle – Casual, cool and cozy, Caravelle is a great place for budget-friendly home-cooked food that ticks all the right boxes.

Travel on a budget around Barcelona 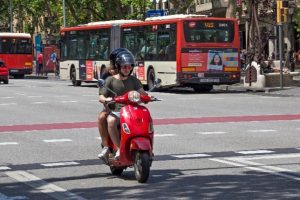 Metro – You can either purchase a single ticket (€2.20) or a 10-journey ticket (€10.20). And if you want to ride the metro multiple times for consecutive days, check out the Hola BCN Tourist Travel Card (unlimited metro rides on Barcelona’s public transportation system for consecutive days).

Rent a bike – Join Fat Tire Tours or Steel Donkey Bike Tour for guided tours or, if you’d rather rent a bike, you can choose from: Barcelona Rent a Bike, Green Bikes or Born Bike.

Rent a scooter – If you’re feeling adventurous, blend in with local Barcelonians and rent a Vespa to get the most out of your day I the city. Fast, easy, and accessible. Prices start from 20 EUR per hour, and you can get a discount for a full-day rent. 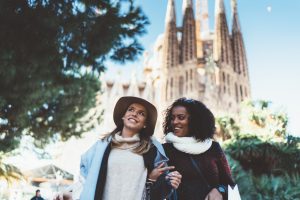 Take a Free Walking Tour with a local company – Runner Bean Tours offers, not one, but two different Free Tours every day, rain or shine. Both tours start at Plaça Reial at 11 am and 4.30 pm (in summer) and 11 am (in winter) and last for approximately 2.5 hours. You can also check out Walkative to explore more free walking tours

This website uses cookies to improve your experience while you navigate through the website. Out of these, the cookies that are categorized as necessary are stored on your browser as they are essential for the working of basic functionalities of the website. We also use third-party cookies that help us analyze and understand how you use this website. These cookies will be stored in your browser only with your consent. You also have the option to opt-out of these cookies. But opting out of some of these cookies may affect your browsing experience.
Essential Cookies Always Enabled
These Cookies are necessary for the Services to function properly and cannot be disabled. They are usually only set, in response to actions made by you, enabling functions like navigation, or setting preferences. These Cookies do not store information about you that will be used for other purposes.
Preferences & Functional Cookies
These Cookies enable the Services to provide enhanced functionality and personalization. They may be set by us (first-party Cookies) or by third-party providers who work with us (third-party Cookies).
Performance & Analytics Cookies
These Cookies are for internal use only. They help us to secure and maintain our Services, and to remember your preferences for tools found on the Services. They are also used for gathering analytics data on how you interact with our Services and the improvement performance of the site accordingly. If you do not allow these Cookies, we will not know when you have visited our site.
Targeting & Advertising Cookies
These Cookies make advertisement more relevant to you. Our advertising partners may use it to show you relevant ads on different websites by uniquely identifying your browser and internet device.
SAVE & ACCEPT